Should Authors Talk About Politics And Religion?

I've noticed something that has been bothering me for awhile...It's the idea that authors aren't supposed to talk about politics and religion.

In America, it is considered impolite to talk about politics and religion. I guess we're just more emotional about it than other countries, so we can't handle it when these things are discussed and sometimes we become mean to each other when these topics come up.

I keep hearing the words,"It's bad for business" because when authors express opinions, especially controversial ones, they can lose fans. I mean, they also sometimes gain fans by doing this, but the focus is generally on losing fans.

I am friends with many male authors and none of them worry about any of these things. The majority of them are outspoken and opinionated, yet still find readers somehow.

One of the most outspoken authors, for example, is Stephen King. If you don't know his political beliefs on things, you haven't been paying attention. He doesn't write about politics, but he definitely has opinions on them and even on other authors. But no one tells him that he needs to tone it down because it's not his place to speak out on such things.

To top it all off, businesses have actually been outspoken about politics for a long time. We all know Chick-fil-a's stance on being against gay marriage, for instance, and Oreos have made it clear on multiple occasions that they support gay marriage and gay rights. But what do those companies know about marketing, right?

I said this on facebook, but I am going to say it again. As an author, we are selling a unique product. Other people sell physical things like pizza or toys, but authors are selling their VOICE. Our product is our words. So we shouldn't be afraid of our words and the things we have to say.

I'm not saying that you have to be controversial all the time or talk about politics/religion constantly. And I'm not saying you won't receive backlash for having certain opinions.

But if you're afraid of your voice and the things you think or have to say, then what exactly are you writing? This is not a job for people pleasers. It never has been a job where people are all happy with everything that you do. That's why we need editors. That's why we get rejections from publishing companies. That's why we get one-star reviews. You have to be able to handle that as an author, people might not like you or the things you have to say, that they will always have a lot of criticism and critiques of everything that you write.

An author has to be strong and able to still write, even when surrounded by people who disagree with them or dislike the way they view the world. Because that stuff leaks into our books.

And books have the power to change the world. Many have caused wars and emotional revolutions, like the Bible and the Communist Manifesto, for instance. And when it comes to fictional books, books like 1984 and even Fifty Shades Of Grey had a profound effect on people.

So why are you stifling your voice? Why, when you have such a powerful tool at your disposal, are you afraid of it?

It's that old cliche,"The pen is mightier than the sword." Words are powerful, so don't be afraid to use them. You don't have to talk about certain subjects, it's up to you, but if you feel passionate about something, it makes sense to talk about it.

And realize that all those many people who are telling female authors that it's not their place to have opinions on things or speak out because people might not love you, have probably been trying to stifle female voices for a long time. I heard similar things growing up. That if I had too many strong opinions, as a woman, that no man would ever love me.

Don't believe in the threats, believe in your voice.
Posted by E.B. Black at 5:37 AM 2 comments:

Why You Are An Invisible Author

I've read so many articles on author branding and I feel like every article misses the point.

Do you want to know the real reason why everyone doesn't buy your book? Because it's universally true for every single book that isn't selling well.

You can't control how many people like you (or anything that you do.)

People use the word "marketing", but it feels like a PC version of the word "popularity contest." All artists are desperate to be popular and well-liked, which is a confusing feeling for authors because the majority of us are introverts.

Same with writing a good book or a bad book.

If you don't make an effort, then you for sure won't succeed. But if you do, you're not guaranteed to succeed.

Everyone works hard, but not everyone gets what they want.

And it's time people recognize this. It's time you let go and accept yourself.

All these authors make these checklists. "This is what you need to do to sell books." But they're wrong.

People say not to be opinionated or talk about controversial things. So how do they explain, Stephen King?

People say to use lots of critique partners and editors. But then how do they explain, E.L. James? (Although it's good to get an editor and learn more about the written word, so you can wield it perfectly. It's like having a sword and sharpening it before battle, so you can kill more people.)

They say you need a good cover, but I've seen people become NYT Bestsellers whose first covers were made in MS Paint.

People say that you can't be so impatient and that it's not about instance gratification, but people become NYT Bestsellers after publishing their first books all the time.

Whenever you are down in life or struggling, people will find a way to make it your fault. They'll try to explain it away, so that the world and the universe is always fair, but it's not.

I just noticed that a lot of people who feel like invisible authors, who are always trying and never getting noticed, feel very discouraged and are sometimes really hard on themselves.

But writing books is like making friends or dating. You can't make people like you, but you can be vulnerable and put yourself out there and eventually you will find that maybe you have what you always wanted to have.

But being vulnerable is hard. Anyone who is vulnerable will be rejected a lot of times. And that's what makes authors, even invisible ones brave. Because they keep putting themselves out there, no matter what people say or do.

Just understand that you can know everything about marketing and still not succeed. That's why many books that make it to publishing houses fail. Those are supposed to be the people who know everything.

My last two books took me two years of rewriting and listening to critique partners before I published them. I had learned so much about marketing and I made sure to get just the right book covers and everything. I even advertised on only sights that I saw bestsellers advertising on.

And it didn't make things better. In fact, so far, my new books made pretty much zero dollars, which is why I made both of them free because they weren't making money anyway. People are still only buying my old books.

I wasn't confident when I wrote them, I didn't trust my own instincts, and that is a mistake.

Art has a problem where artists aren't considered good unless they are constantly criticizing and abusing themselves, which is actually an unhealthy mindset to have. When you look at the successful artists, they aren't like that. They're confident in themselves and their decisions and that confidence helps them be brave enough to take risks and make mistakes. 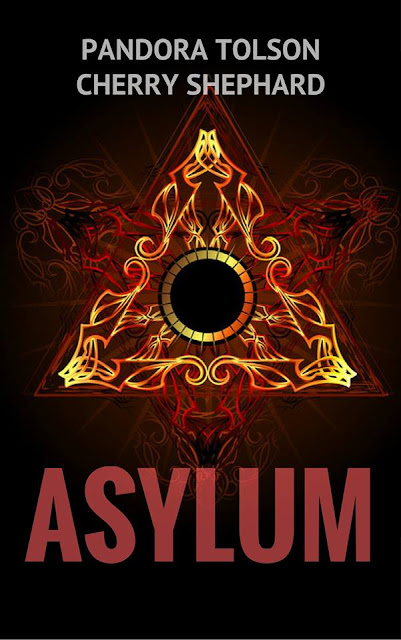 What if your favourite fairytale characters lived in an insane asylum?

This is not your average story, and you're about to learn that not every fairytale ends with Happily Ever After...

From the dawn of time, humans have been bred to fear.
It is the very fabric of human nature, it keeps us safe. It is what gives our miserable little lives meaning, it is the reason we hold our loved ones close. Fear is a dark shadow. A sneaky, sinister entity that haunts our dreams, and hunts us as though we are it's prey.
Here, inside the walls of this establishment, I am that Shadow. I am your greatest nightmare come to life. I am Doctor Eleanor Naylor.

This is Thornwood Asylum.
Welcome Home.
Posted by E.B. Black at 6:55 AM No comments: