If you haven't heard of The Fortune Cookie Diaries, then you can get a free copy of the first novella here.

Today, T.J. Loveless is here to show us the cover of her 3rd story and tell us about her series: The Fortune Cookie Diaries.

1. Who is your favorite character in The Fortune Cookie Diaries?

While I am partial to Miracai - he is so much fun - there is a character coming up in Weird Number Three that is my favorite. She's got Miracai's number, and it should prove to be a hoot. All I can say, her name is Bruddy :)

2. Were you surprised that Miracai became such a popular character?

Yes! It was a complete shock. I knew people would like him, he is full of personality, but nothing like what happened. Of the seventy four fan emails I received, more than fifty said they bought stuffed unicorns. It still tickles me to know he garnered so much adoration.

3. What's your favorite thing about writing The Fortune Cookie Diaries?

Using humor, instead of something dark, to push the plot forward. It's new and unique to me. I have to find someway to get a character to do something - I can't kill them off, kill a friend/family member, etc. I have to figure  out a way for something funny instead. It definitely stretches your imagination and writing skills!

4. What made you decide to self-publish them?


I researched at first, when the ideas for The Fortune Cookie Diaries came to me. Traditional publishers, and agents, don't take novellas. Some indie publishers do, but they don't sell as well because of cost. But friends talked to me about self publishing - answering my really stupid questions. But I kept asking myself, did I want to take on all the responsibilities? The marketing, cover, editing, formatting, etc. Could I take the responsibility? The answer turned out to be, yes.

I didn't want to give up the idea of TFCD, everybody needs something lighthearted to turn to once in a while. I knew it was going to be a long hard road, Humorous Urban Fantasy is unheard of. But I don't think I'm doing too badly, for my first foray into self publishing.
5. How would you describe your sense of humor?

It varies. I can be fairly sarcastic, down to keeping a toddler entertained with silly stuff. I laugh at my own klumsiness, love the Keystone Kops, Laurel & Hardy, Brett Butler, Bette Midler, Mel Brooks, and still laugh at all the Shrek movies. A lot depends on my mood. I try to stay in as good a mood as possible when writing TFCD, or I get too snarky. 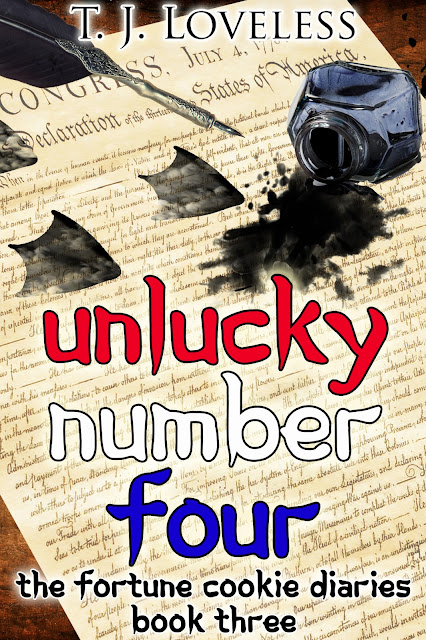 In New Orleans, Louisiana, something with a weird sense of humor is stranding myth in a nonmagical world.

Dr. Tiffany Crews and gang find themselves no longer chasing Damn Duck, running into walls or spilling soup. As a matter of fact, no accidents have happened in the last week.

It isn't until they find Damn Duck sitting quietly on the balcony, Miracai, the carnivorous unicorn, eating greens without flatulence, and her klutz tendencies missing, Tiffany realizes something is up.

Only when her best friend, Janet, begins dating a man named Aiden Murphy, does Tiffany understand - Murphy has been dropped into New Orleans. Not a far stretch of imagination considering the Fairy Godmother identifies him during lunch at Chopstix.

All the years of pent up frustration leads the entire gang into trouble as they decide it is time to get revenge, giving Murphy, and those bloody laws of his, a taste of his own medicine.

If only it was that simple.

About the Author:
T.J. Loveless can generally be found covered in Muses and Editor Kitty, ignoring the growing herd of dust bunnies and trying to put the HD movies of her imagination into a document that makes sense.

Writing in the Spec Fic genre, she's usually trying to figure out how to put a dragon into every book, and how to twist old myths for her own nefarious purposes.

You can find T.J. Loveless all over, usually showcasing the lack of brain - mouth filter normal people seem to have in abundance.

The Gate Keeper of Self-Publishing

Most people have only one big complaint against self-publishing. The complaint is that there is no gate keeper. No one guarding self-publishing from being infested by poor spellers and authors. They claim it's full of garbage unlike traditional publishing because no one is weeding out the bad authors from the good.

One reason it bothers me is that I know I'm not a perfect writer. I know some people that read my book will hate it and that I'm going to make mistakes sometimes in my career. I can't judge other self-published authors as ruining my career unless I first feel perfect myself. I don't. I can always use more practice. I can always use critique partners and an editor. They all help me so much.

Not to mention that this business is a subjective one and someone might read a self-published novel whether it's excellent or not and decide they hate it. They can come to the conclusion that they will also hate all other self-published author, even though this is in no way the fault of the actual author.

I know there are lots of blogs about how to self-publish better. My blog has some posts along these lines, but there needs to be more than that. We should e-mail each other and support each other more. I know when I made my biggest publishing mistake this past year and was in a teary mess about it, I couldn't have gotten through it without the help of other people. I couldn't have fixed it and decided to do better in the future without that help.

We can be our own gate keepers. We can prevent bad stories from being published by helping other authors not write bad stories.

We all only have a limited amount of time, I know, and we can't control what other authors decide to publish, but I do think we can all make a bigger effort to help.
Posted by E.B. Black at 1:46 PM 3 comments: